One of the many facets of this project is testing the member connections of the Memorial Bridge in Portsmouth. The research team is especially interested in this because these new type of connections are relatively untested and we want to see how they hold up over time. The main way that this is tested is by doing strain testing. Traditionally, this is done by using strain gauges, which have to be manually placed on the bridge. This type of strain measurement is the most accurate type of measurements, but it is also the most time consuming, the most expensive, and also could potentially damage protective coatings on the bridge. Because of these drawbacks, the research team has been investigating and employing a new technique of testing. 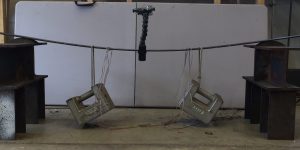 This new type of testing is called Digital Image Correlation (DIC) and uses GoPro cameras to conduct the tests. The way this type of testing works is that a GoPro camera is mounted to the member that is being tested, whether it is in the lab or on the bridge, using a “gooseneck” attachment. Then, the camera is used to take a video of the strain tests, usually about one minute. After this, the video is broken down into thousands of frames which can be analyzed by the software. These frames are then put through a piece of software called Vic-2D, which will go frame by frame and measure the distance between pixels from the previous pictures. The software will then translate this to an excel file, where the research team can graph out the strain and figure out what it means for the health of the members.

When it comes to Digital Image Correlation, there are numerous advantages as well disadvantages when compared to normal gauge testing. The major advantage is the ease of testing. For DIC testing, the only piece of equipment needed is the GoPro camera, all of the data is stored in the camera, and the rest of the post-processing can be done in the lab. When it comes to using a physical strain gauge, there are many more steps that are necessary. First of all, these gauges require that the protective coating on the bridge must be ground off which can permanently damage the bridge. The GoPro cameras do not require this, they can just be clamped onto the member. 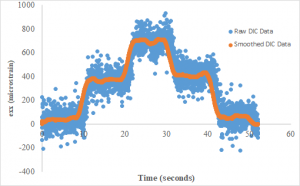 Also, for the foil gauges there is quite a bit of wiring involved which must be connected to a Data Acquisition system (DAQ). This DAQ also must be connected to a computer which makes for a lot of equipment on site. This is the biggest advantage of DIC over traditional strain testing, the amount of equipment is much less and there is no damage to the bridge. One of the main disadvantages of DIC is that it can be less accurate than traditional testing, especially if the camera is hit or moved during testing. Digital image correlation software is an innovative new technique that can be used for structural health monitoring without the need for extensive equipment.